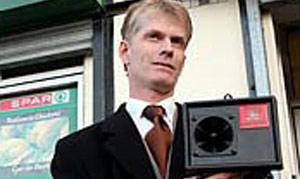 Boing Boing and MAKE note a New York Times story about the Mosquito, a speaker unit produced by Compound Security which produces a high frequency sound (less audible to older people) in order to drive away teenagers hanging around in front of shops.

So far, the Mosquito has been road-tested in only one place, at the entrance to the Spar convenience store in this town [Barry] in South Wales. Like birds perched on telephone wires, surly teenagers used to plant themselves on the railings just outside the door, smoking, drinking, shouting rude words at customers and making regular disruptive forays inside.

“On the low end of the scale, it would be intimidating for customers,” said Robert Gough, who, with his parents, owns the store. “On the high end, they’d be in the shop fighting, stealing and assaulting the staff.”

Mr. Gough…planned to install a sound system that would blast classical music into the parking lot, another method known to horrify hang-out youths into dispersing, but never got around to it. But last month, Mr. Stapleton [the inventor] gave him a Mosquito for a free trial. The results were almost instantaneous. It was as if someone had used anti-teenager spray around the entrance, the way you might spray your sofas to keep pets off. Where disaffected youths used to congregate, now there is no one.

At first, members of the usual crowd tried to gather as normal, repeatedly going inside the store with their fingers in their ears and “begging me to turn it off,” Mr. Gough said. But he held firm and neatly avoided possible aggressive confrontations: “I told them it was to keep birds away because of the bird flu epidemic.”

It reminds me of times in school physics lessons where we’d set a frequency generator (with audio output) to about 19-20 kHz (which all the students could just about hear, but the teacher–50-odd–couldn’t) and gradually, over the course of the lesson, turn the knob to reduce the frequency until at about 14-15 kHz, the long-suffering teacher (whom I won’t name) would usually notice (a slight twitch would pass across his face) and sigh as he realised what we’d done.

On the point of the Mosquito itself, it’s interesting to consider discriminatory architectures within design. There aren’t that many that would be considered ‘acceptable’: for example using high shelves, child-proof lids and so on are seen as OK (‘discrimination against children is OK because they don’t know what’s good for them’), yet it’s rare for the reverse to be true.

Say a car manufacturer wanted to discourage older people from buying/being associated with its cars (maybe commercially unlikely, but bear with me). Would it be censured for only fitting low, difficult-to-get-into bucket seats in the hope that many older people would be put off in the showroom?

It’s ‘OK’ for playgrounds and theme-park rides aimed specifically at children to have an upper height restriction (‘you must be able to walk under this bar to use this playground’), but would it be acceptable for a trendy bar to have a very steep staircase deliberately to discourage more arthritic potential clientele from visiting?

Just some thoughts. While the Mosquito is interesting, I wonder if the kids will simply stop using the Spar and go somewhere else. I know I would have done at that age.