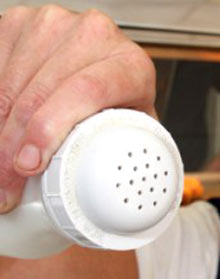 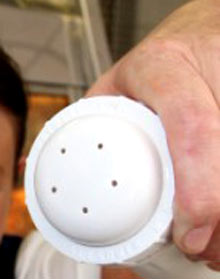 UPDATE: See the detailed response below from Peter of Gateshead Council, which clarifies, corrects and expands upon some of the spin given by the Mail articles. The new shakers were supplied to the chip shop staff for use behind the counter: “Our main concern was around the amount of salt put on by staff seasoning food on behalf of customers before wrapping it up… Our observations… confirmed that customers were receiving about half of the recommended daily intake of salt in this way. We piloted some reduced hole versions with local chip shops who all found that none of their customers complained about the reduced saltiness.”

A number of councils in England have given fish & chip shops replacement salt shakers with fewer holes – from the Daily Mail:

Research has suggested that slashing the holes from the traditional 17 to five could cut the amount people sprinkle on their food by more than half.

And so at least six councils have ordered five-hole shakers — at taxpayers’ expense — and begun giving them away to chip shops and takeaways in their areas. Leading the way has been Gateshead Council, which spent 15 days researching the subject of salty takeaways before declaring the new five-hole cellars the solution.

Officers collected information from businesses, obtained samples of fish and chips, measured salt content and ‘carried out experiments to determine how the problem of excessive salt being dispensed could be overcome by design’. They decided that the five-hole pots would reduce the amount of salt being used by more than 60 per cent yet give a ‘visually acceptable sprinkling’ that would satisfy the customer.

OK. This is interesting. This is where the unit bias, defaults, libertarian paternalism and industrial design come together, in the mundanity of everyday interaction. It’s Brian Wansink’s ‘mindless margin’ being employed strategically, politically – and just look at the reaction it’s got from the public (and from Littlejohn). A BBC story about a similar initiative in Norfolk also gives us the industry view:

A spokesman for the National Federation of Fish Friers called the scheme a “gimmick” and said customers would just shake the containers more.

Graham Adderson, 62, who owns the Downham Fryer, in Downham Market, said: “I think the scheme is hilarious. If you want to put salt on your fish and chips and there are only four holes, you’re just going to spend longer putting more on.”

I’m assuming Gateshead Council’s research took account of this effect, although there are so many ways that users’ habits could have been formed through prior experience that this ‘solution’ won’t apply to all users. There might be some customers who always put more salt on, before even tasting their food. There might be people who almost always think the fish & chips they get are too heavily salted anyway – plenty of people, anecdotally at least, used to buy Smith’s Salt ‘n’ Shake and not use the salt at all.

And there are probably plenty of people who will, indeed, end up consuming less salt, because of the heuristic of “hold salt shaker over food for n seconds” built up over many years of experience.

Overall: I actually quite like this idea: it’s clever, simple, and non-intrusive, but I can see how the interpretation, the framing, is crucial. Clearly, when presented in the way that the media have done here (as a government programme to eliminate customer choice, and force us all down the road decided by health bureaucrats), the initiative’s likely to elicit an angry reaction from a public sick of a “nanny state” interfering in every area of our lives. Politicians jumping on the Nudge bandwagon need to be very, very careful that this isn’t the way their initiatives are perceived and portrayed by the press (and many of them will be, of course): it needs to be very, very clear how each such measure actually benefits the public, and that message needs to be given extremely persuasively.

Final thought: Many cafÃ©s, canteens and so on have used sachets of salt, that customers apply themselves, for many years. The decision made by the manufacturers about the size of these portions is a major determinant of how much salt is used, because of the unit bias (people assume that one portion is the ‘right’ amount), and, just as with washing machine detergent, manipulation of this portion size could well be used as part of a strategy to influence the quantity used by customers. But would a similar salt sachet strategy (perhaps driven by manufacturers rather than councils) have provoked similar reactions? I’m not sure that it would. ‘Nanny manufacturer’ is less despised than ‘nanny state’, I think, certainly in the UK.

What do you think?