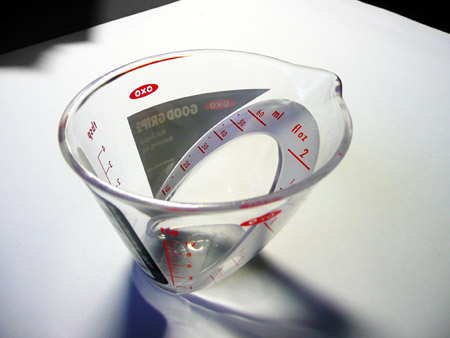 A few years ago I went to a talk at the RCA by Alex Lee, president of OXO International. Apart from a statistic about how many bagel-slicing finger-chopping accidents happen each year in New York city, what stuck in my mind were the angled measuring jugs he showed us, part of the well-known Good Grips range of inclusively designed kitchen utensils.

The indicia on an upwardly directed surface of the at least one ramp allows a user to look downwardly into the measuring cup to visually detect the volume level of the contents in the measuring cup, thereby eliminating the need to look horizontally at the cup at eye level. 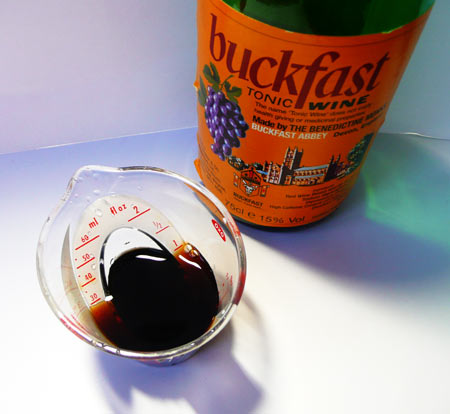 Now, this is an extremely simple way to improve the process of using a measuring cup / jug. It’s good if you find it hard to bend down to look at the side of the vessel. It’s helpful if you’re standing over it, pouring stuff into it. It reduces parallax error – so potentially improving accuracy – and it also, simply, makes it easier to be accurate.

In this sense, then, improved / easier-to-read scales can influence user behaviour. I guess that’s obvious: if it’s easy to use something in a particular way, it’s more likely that it will be used that way. It’s a persuasive interface, in an extremely simple form. 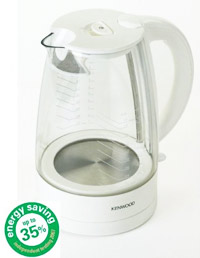 So, the question is, if I build an electric kettle with an angled scale like this, will it make it more likely that people use it more efficiently, i.e. fill it with the amount of water they need? If you’re standing with the kettle under the tap, putting water in, is this kind of angled scale going to make it easier to put the right amount in?

Kenwood sells a kettle which has angled scale markings, the JK450/455 (right), though they’re implemented differently to (and more cheaply than) the OXO method, simply being printed on the side of the kettle body. It’s still a clever idea. This review suggests an energy saving of around 10% compared with Kenwood’s claimed “up to 35%” but of course this saving very much depends on how inefficient the user was previously.

I think something along the lines of either the OXO or Kenwood designs (but not infringing the patents!) is worth an extended trial later this year – watch this space. 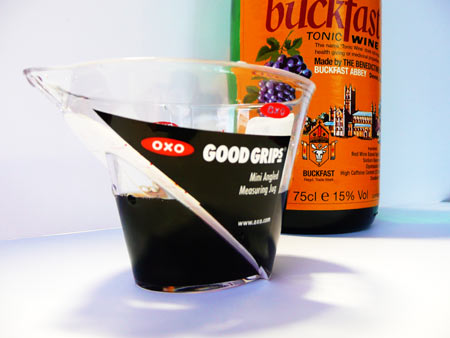 Thanks to Michael for the Buckfast.