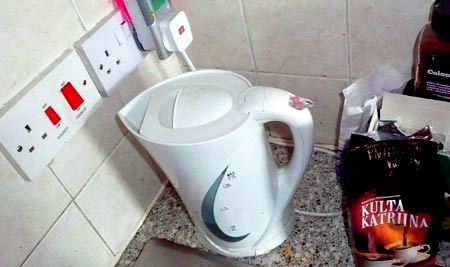 Understanding what people really do when they carry out some ‘simple’ task, as opposed to what designers assume they do, is important. Even something as mundane as boiling a kettle to make a cup of tea or coffee is fraught with variability, slips, mistaken assumptions and so on, and can be studied in some depth to see what’s really going on, or could be going on (e.g. this analysis from 1998 by my co-supervisor, Neville Stanton and Chris Baber). Everyday tasks can be complex.

This is very clever stuff – well worth exploring. 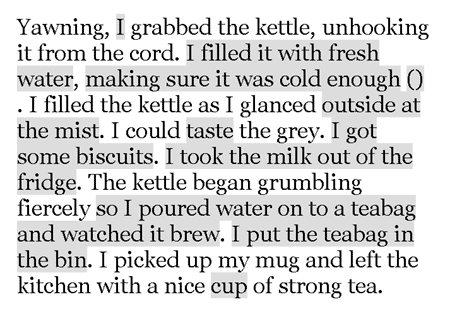 As Joe’s meta description for the page says, this is “an exploration of scale and levels of detail. How much or little is contained within the tiniest, most ordinary of moments.” What scripts are embedded here for the user in this system of kettle, mist, mug, stale biscuits?

The dominating level of detail reminds me a bit of Tom McCarthy’s Remainder, a novel almost entirely about interaction between people and environments. Or perhaps some of Atrocity Exhibition/Crash-era Ballard, where interactions between people, objects and spaces are broken down endlessly, obsessively.

Back to kettles for a moment: they’re going to feature more heavily on the blog over the next year, in various forms and on many levels. More than almost any other energy-using household product, they’re ripe for the ‘Design for Sustainable Behaviour‘ wand to be waved over them, since almost all the wasted energy (and water) is due to user behaviour rather than technical inefficiency. It’ll be more interesting than it sounds!