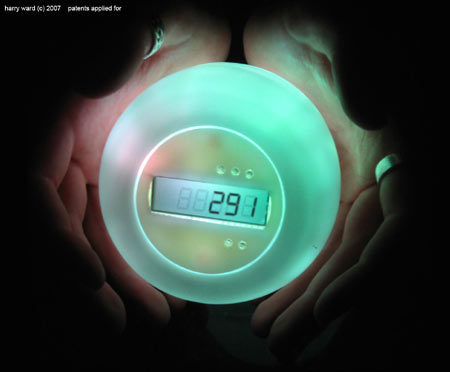 We’ve looked recently at water taps with meters built in, the thinking being the ‘speedometer’ approach to shaping users’ behaviour – making users aware of the scale/rate/level of some activity should cause them to adjust that behaviour.

A number of projects and initiatives also apply this approach to electricity use – one of the most explicitly ‘designerly’ being Wattson – but there are a variety of different approaches, a handful of which I’ve reviewed here.

Harry Ward: Orb Energy Monitor
Recent design graduate Harry Ward’s Orb energy monitor (above and below) is especially attractive: a toroidal inductor is clipped around the cable being measured, and transmits data wirelessly to the Orb itself, a hand-held unit which glows different colours depending on the power being drawn.

The display on the Orb could show the user the direct electricity cost and CO2 emissions equivalent, as well as the actual power being used and cumulative energy (kWh) used over a period. Harry has applied for patents and is looking to license the design in order to get the Orb into production. 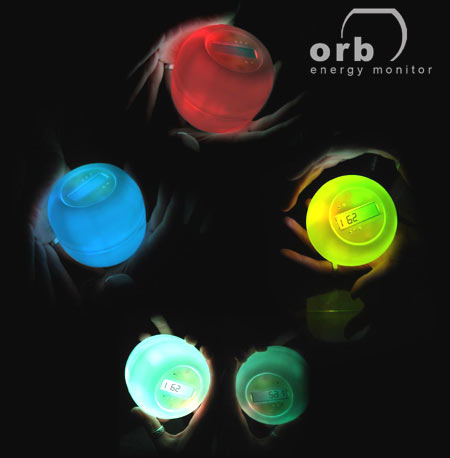 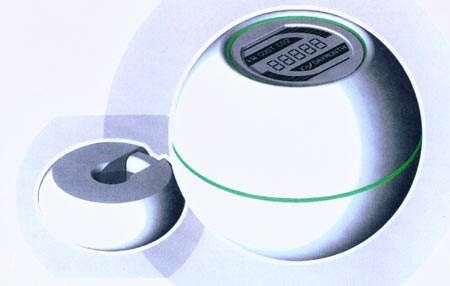 The Energy Joule is designed to remain in situ, plugged into a wall socket, and it glows different colours (red, yellow, green) according to the price of electricity at the time – the idea being to encourage users to shift discretionary electricity use to times when there is less demand, and help the electricity generators balance their loads (an increasing problem), in return for ‘rewards’. As part of a wireless network (the Ambient Infocast Network – this is getting closer to everyware), the unit also displays other information such as temperature, weather forecast, and so on – and it’s the community’s electricity usage which is generally intended to be displayed, rather than the individual user’s. 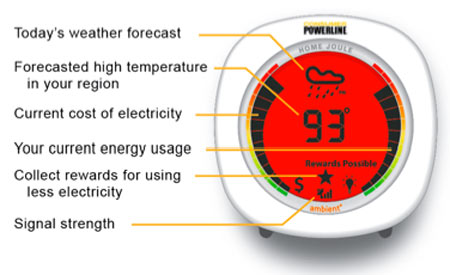 (Ambient Devices also have a product called the Energy Orb – no relation to Harry’s product above – a version of their general Orb specifically locked-in to displaying the same electricity price/demand level as the Energy Joule.)

Take the use of an everyday iron. A microprocessor within the Power Aware Cord immediately detects and converts the amount of energy used to power the appliance into a phosphorous thread that glows. The modern blue light intensifies and diminishes relative to energy flow. Increase the temperature of the iron and the cable will instantly glow brighter.

The versatile cord can be built-in or connected to the modern electrical appliance both directly or in distribution board format. Turn the appliance on and the flow of energy lights up the cord with a decorative glow.

This is an interesting approach: it allows users to be immediately aware of the devices which are consuming power, perhaps on standby, and is visually distinctive enough to make it difficult to ignore. As with all these products, extra energy is used to power the monitoring and display (lighting, etc), but this amount is small compared with the amount that may be saved if users do adjust their behaviour significantly.

This product concept helps reduce wasted electricity in the home caused by appliances that have inefficient standby modes by making users aware of how much energy they use. Further developments include a light switch and plug socket disabling device that will make it easier for the user to save electricity.

Details and images from the University’s 2007 design graduate directory

I’ve made the observation before on the blog that without undertstanding what being ‘on standby’ involves for many devices, a lot of users assume that because just that one red LED is lit, that’s all the power being used. Anything which can bust the myth by showing that significant power is still being used is very much worthwhile, although changing the way that standby modes operate would ultimately be preferable (I’m dubious about the moves to ban standby functions entirely, for reasons explained here).

But do these kinds of things actually work in reducing energy use?
Eric and Alex let me know about an ongoing research project by Jordan Fischer, Sarah Jones and John Kestner at the IIT Institute of Design in Chicago in which methods of making users aware of their energy use are tried out:

They wired up a house to constantly monitor energy consumption in real time to increase awareness… no one knows how users might respond unless the concepts are tried out and feedback is gathered. What my classmates found when they prototyped their system was that the housemates (who are concerned about sustainability if not acutely aware of their impact) ended up turning the system into a game. “How low can we get the number to go?” Not sure how such a game would work for long term behavior change yet, but who knows. If it’s fun, it might work.

Alex, a participant in one of the experiments, sheds some more light on the ‘game’ aspects:

One thing that I never expected was that I tried a couple of time to see not only how low we could get the number, but also how high. I am not sure either what the more long term effects of such a game might have been, but thinking back, as with these water meters, it is difficult to improve your consumption habits once the obvious sources of waste are eliminated. Or, if it is a game, are we trying to beat our own averages those of our friends or neighbors or some ideal rate? What are we to compare to, A Bill McDonough Zero Waste standard or incremental improvement?

It will be interesting to see the results of the project as it progresses – one intriguing aspect is the Watt Watchers trial [PDF link], where a network of light bulbs dims if too many are left on, and thus ‘coaches’ the user not to leave lights on unnecessarily:

All the light bulbs in a house have special collars that find each other via a mesh network and say whether they’re on or off. Then they all decide based on how many of them are on whether to dim to remind the occupant that too many things might be on. 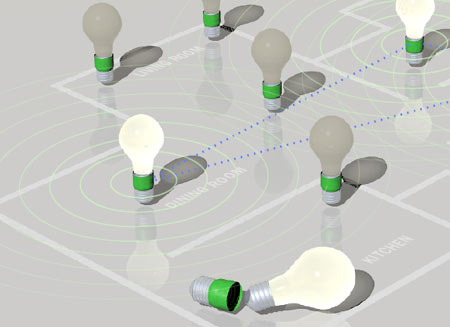 Overall, there are some very interesting products and projects in this field of ‘making energy use visible’, and if it does have the potential to influence user behaviour significantly, more widespread adoption must be likely in the years ahead.