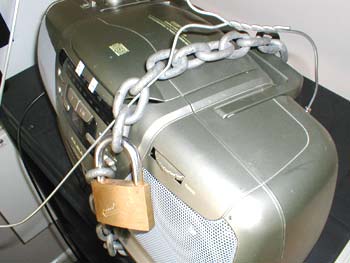 “Rep. Mike Ferguson (R-N.J.) has introduced a bill to cripple all digital radios. The Audio Broadcast Flag Licensing Act of 2006 (H.R. 4861) requires all digital radio makers to build their devices so that they only permit “customary uses” of broadcasts… it requires radio device makers to cripple their products to prohibit “unauthorized copying” – which is a lot more broad than “illegal copying.” As we’ve heard, the RIAA’s position is that no copying is implicitly authorized – they don’t even think you should be allowed to rip your CDs.”

Now, while this wouldn’t directly affect us in the UK or Europe, the knock-on effects would certainly be felt. How long before the same thinking (if not the exact same letter of the law) becomes prevalent here?

As I see it, there are three main things we should be worred about with this type of ‘initiative’:

– By defining so explicitly (and arbitrarily) what a ‘radio’ is, and what it can and can’t do, legally, it is inevitably going to stifle the opportunities for innovation that come from designers and technologists (often inspired by hobbyists’ mods) extending and breaking product boundaries, creating new features and finding new ways to use content. (If it were not for this kind of innovation, there would never have been digital radios, or any radios, in the first place).

– As a corollary, it preserves in legally-enforced aspic the current business model of those lobbying for such a law, whilst denying future innovators and entrepreneurs the opportunities to develop their own, different business models, hence leading to monopolistic dominance of the sector by the existing players.

– Finally, it’s simply a lousy deal for the consumer, which should surely never be the intention of any responsible designer. As a consumer, I want to be able to do as much as possible with any device I purchase. I want to maximise my utility, and the market should be free to allow that.

As Cory puts it,

“No constituent of Ferguson’s woke up this morning wishing for a way to do less with her radio. There’s no manufacturer who can sell more radios by advertising “Now! With fewer features!” This is a bill to steal from tomorrow’s entrepreneurs, who’ll never get to invent the next generation of awesome music tech, in order to line the pockets of yesterday’s recording industry fatcats.”

I’d also quote Isambard Kingdom Brunel, who (on the idea of government prescribing regulations for bridge design) said, in 1847:

“In other words, embarrass and shackle the progress of improvements of tomorrow by recording and registering as law the prejudices and errors of today”.