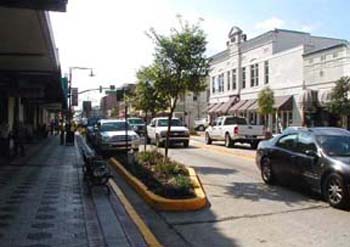 Ryan G Coleman kindly sent me a link to this very interesting New Urban News story, ‘Research: trees make streets safer, not deadlier’. The gist is that roads planted with trees cause drivers to put themselves in state of greater alertness, which makes them generally more cautious about driving and generally slow down:

“Proposals for planting rows of trees along the roads – a traditional technique for shaping pleasing public spaces – are often opposed by transportation engineers, who contend that a wide travel corridor, free of obstacles, is needed to protect the lives of errant motorists…

[However], Eric Dumbaugh, an assistant professor of transportation at Texas A&M… looked at accident records and found that, on the contrary, wide-open corridors encourage motorists to speed, bringing on more crashes. By contrast, tree-lined roadways cause motorists to slow down and drive more carefully, Dumbaugh says.

Dumbaugh examined crash statistics and found that tree-lined streets experience fewer accidents than do “forgiving roadsides” – those that have been kept free of large, inflexible objects. He points to “a growing body of evidence suggesting that the inclusion of trees and other streetscape features in the roadside environment may actually reduce crashes and injuries on urban roadways”…

Dan Burden, senior urban designer for Glatting Jackson and Walkable Communities Inc. in Orlando, notes that there is research showing that “motorists need and benefit from tall vertical roadside features such as trees or buildings in order to properly gauge their speed.”

The article goes on to mention the ‘Shared Space‘ work of Hans Monderman, Ben Hamilton-Baillie and others, which includes removing road markings as part of a wider scheme to change the perceived emphasis of an environment and, again, put drivers into a state of greater awareness. From the BBC article on the ‘naked road’ experiment in Seend, Wiltshire:

“Motoring psychologists and urban planners seem to agree that, overall, “naked roads” appear to have a positive effect on motorists…

“This approach draws on behavioural psychology involving the way drivers respond to their surroundings,” [Ben Hamilton-Baillie] says. “It removes the sense of security provided by barriers – such as kerbs, and traffic lights. Instead of relying on the street system for security, drivers are forced to use their reactions.”

Why are these techniques so much better than this kind of thing?

As so often, I feel it’s better to put users of a system into a state of mind where they are actively, intelligently thinking about what’s going on, and how they can respond to dangers or risks in the environment, than to remove that option for awareness or action planning, and deliberately force them into a state of ignorance of the risks ahead just to compel them to slow down. The driver in the tree-lined or Shared Space road situation can read the road ahead, and adjust his or her behaviour based on the risks that are perceived, whereas just blocking drivers’ vision so they can’t read road hazards ahead and must therefore actually come to a stop, does much less to help safety, and instead merely causes frustration.