I’ve recently been doing a vast amount of reading (and writing a brief paper) on architectures of control-type strategies and precedents, from lots of different fields, as a precursor to planning the first practical parts of my PhD research, and in trying to classify and categorise different approaches, I’ve once again had to think about defining exactly what it is I’m investigating.

‘Architectures of control’ is a powerful label, and fits well (I think) with the original definition I applied to it, but on a more abstract level, these kinds of strategies – whether the ‘control’ is persuasion, coercion, stick, carrot, or something else – are all about intent on the part of the designer (as noted by ‘Silverman’ in a comment here). All the strategies involve design intended to result in certain user behaviour. The designer/engineer/planner, or his/her masters (corporate or political) have particular behavioural outcomes in mind for the interaction between user and product/system/environment (whether or not those intended outcomes actually occur is another matter). So, I considered Design with Intent (DwI) to encompass, more succinctly, the scope of my research. As such, I’ve added the phrase to the blog’s title; the ‘Architectures of Control’ part will remain in addition. Previous name change discussions raised some very interesting points about the merits and implications of different terminology. 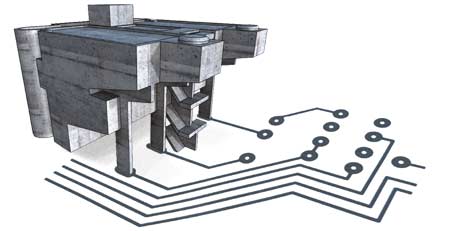 The blog itself will also be changing a bit. If you’re reading directly rather than via RSS, you’ll have seen the new header image (larger version above), which attempts to symbolise both the architectural and the technological by inserting a building onto PCB-like tracks and pads: product and building design can very much be components of intentionally engineered behavioural systems, which is to some extent the message the blog’s trying to put across. I’ve loosely modelled the building in the image on the heavily Brutalist Brunel University Lecture Centre, by Richard Sheppard, most famous from its appearance as the Ludovico Centre in A Clockwork Orange. Many Brutalist (and Modernist) structures strike me as being very much like scaled-up consumer products set into a larger landscape (possibly why they seem to appeal more to designers and engineers than to the general public); what better to represent the idea of product architecture than actual architecture which resembles a product, or even an electronic component? It even has pins in the right place.

You might also notice that I’ve relegated the ‘Fulminate‘ posts to their own position in the sidebar – from now on, they won’t directly appear in the main body of the homepage, though if you click on the logo you can see them all, at fulminate.co.uk (which is really just architectures.danlockton.co.uk/category/fulminate). The main reasons for moving them are that a) not being about architectures of control, they tended to distract from the main focus of the blog, and potentially confuse new readers, b) they’re generally (so far) about things such as freelancing or Runnymede which are of interest to a different set of readers and c) if I want to develop Fulminate further as a blog, it will be neater standing slightly separated. The idea of having everything thrown together in the same blog seemed good at the time but in practice it irritated me a little too much. Hey, it’s just the annual re-branding.

My aim is to maintain this blog more consistently in 2008, and make it useful as an archive of DwI examples, techniques and approaches, as well as chronicling my PhD research and (hopefully) helping engage other designers and technologists interested in this area. In that vein I really do hope to reply to e-mails more quickly, engage further with commenters, and so on, as well as rewriting much of the introductory material linked from the sidebar so that it’s more up-to-date and benefits from examples that have come to light over the past couple of years, as well as actually explaining my current research. Now that I’ve got something more closely approximating a ‘normal’ working week, as opposed to the arbitrary hours that freelancing entails, it ought to be possible to keep up this website in a timely and regular manner. We’ll see.