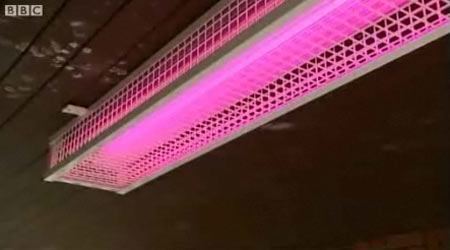 In a similar vein to the Mosquito, intentionally shallow steps (and, superficially at least–though not really–blue lighting in toilets, which Raph d’Amico dissects well here), we now have residents’ associations installing pink lighting to highlight teenagers’ acne and so drive them away from an area:

Residents of a Nottinghamshire housing estate have installed pink lights which show up teenagers’ spots in a bid to stop them gathering in the area.

Members of Layton Burroughs Residents’ Association, Mansfield say they have bought the lights in a bid to curb anti-social behaviour. The lights are said to have a calming influence, but they also highlight skin blemishes.

The National Youth Agency said it would just move the problem somewhere else. Peta Halls, development officer for the NYA, said: “Anything that aims to embarrass people out of an area is not on. “The pink lights are indiscriminate in that they will impact on all young people and older people who do not, perhaps, have perfect skin.

I had heard about this before (thanks, Ed!) but overlooked posting it on the blog – other places the pink lights have been used include Preston and Scunthorpe, to which this quote refers (note the youths=yobs equation):

Yobs are being shamed out of anti-social behaviour by bright pink lights which show up their acne.

The lights are so strong they highlight skin blemishes and have been successful in moving on youths from troublespots who view pink as being “uncool.”
…
Manager Dave Hey said: “With the fluorescent pink light we are trying to embarass young people out of the area. “The pink is not seen as particularly macho among young men and apparently it highlights acne and blemishes in the skin.
…
A North Lincolnshire Council spokesman said: “[…]”On the face of it this sounds barmy. But do young people really want to hang around in an area with a pink glow that makes any spots they have on their face stand out?”

With the Mansfield example making the news, it’s good to see that there is, at least, quite a lot of comment pointing out the idiocy of the hard-of-thinking who believe that this sort of measure will actually ‘solve the problem of young people’, whatever that might mean, as well as the deeply discriminatory nature of the plan. For example, this rather dim (if perhaps tongue-in-cheek) light in the Nottingham Evening Post has been comprehensively rebutted by a commenter:

If this is the case then I would personally love to see adults banned from meeting up in pubs, parties and generally getting drunk. I would also love to see something making fun of their elderlyness and wrinkle problems.

I don’t understand why Britain hates its young people so much. But I can see it storing up a great deal of problems for the future.

Photo from this BBC story