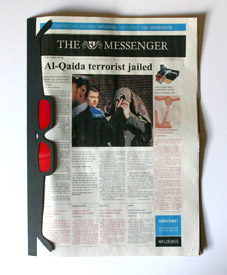 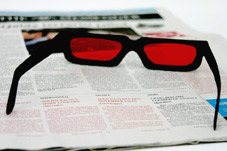 This is brilliant. ChloÃ« Coulson, Erland Banggren and Ben Williams, three Ravensbourne graduates, have put together a project looking at the “culture of fear”, the media’s use of this, and how it affects our everyday state of mind.

The outcome is a catalogue, WellBeings™ [PDF link] accompanying a specially printed newspaper, The Messenger, designed to be used with special rose-tinted spectacles – simple, yet very clever:

Feeling brave? Read the paper as usual. Feeling fragile? Put on the rose-tinted spectacles to block out the bad news stories which are printed in the same hue as the lenses so it becomes invisible. 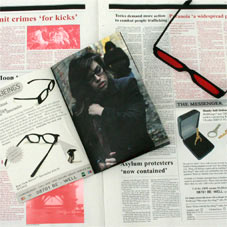 The products in the catalogue cater for people made increasingly paranoid by aspects of modern society, by ‘normalising’ paranoia – ranging from H-ear-Phones which allow you to hear what others are saying about you, to Rear-View Mirror spectacles to allow you to keep an eye on who might be following you. As ChloÃ« puts it:

The whole project is about questioning attitudes – should we live in fear – are we safer that way, or should we live for now and not worry about what could happen.

There are also a couple of products in there which are actually defensive weapons – a pepper spray disguised as a perfume atomiser, and house-key-cum-knuckleduster, and these seem to go beyond mere paranoia. All of these products are very plausible, and indeed, some of them are probably commercially viable. Whilst none of these is an architecture of control as such, I felt that they deserved inclusion here – pertinent to the sousveillance discussion, and also the idea of users turning products against instrusive aspects of society, from relatively simple items such as the Knee Defender (prevent the person in front of you on an aircraft reclining his or her seat) to Limor Fried’s Design Noir work on using electronic devices to create social defence mechanisms.

Equally – while perhaps not the focus of the project – the rose-tinted spectacles idea parallels closely the phenomenon of increasing self-selection of the news we expose ourselves to, as the internet and hundreds of TV channels allow segmentation like never before. The idea of a newspaper bringing readers only ‘good’ news has been tried a number of times (a recent example one-off) and has inspired some interesting pieces, but modern media permits many more coloured filters than simply rose-tinting. Clearly, to a large extent, deliberate use of this segmentation can permit intentional reinforcement, entrenchment, even inspiration of certain views and behaviours. Self-selected exposure to propaganda is a curious phenomenon, but one with enormous power.