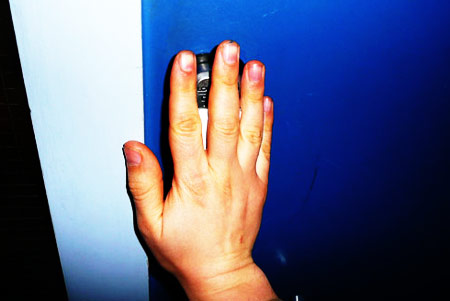 It’s been a long time since I last wrote an Instructable, but as I’ve resolved that 2009’s going to be a year where I start making things again (2008 involved a lot of sitting, reading and annotating, and in 2007 most of what I made was for clients, and thus confidential), I thought I’d write up a brief (10 minute) fun little bodgey project which has, very marginally, boosted everyday productivity: the One-Touch Keypad Masher.

Wasting valuable seconds typing in a code every time you need to open the door?

This little ‘device’ streamlines the process by pressing the right keys for you, and can be hidden in your palm so you simply mash your hand against the keypad and – apparently miraculously to anyone watching – unlock the door in one go.

Time to make: Less than 10 minutes
Time saved: About 30 seconds per day in my case; your mileage may vary.
Payback time: 20 days, in this case

(There’s a (weak) correlation with some of the Design with Intent topics, since it could be seen as a device which allows a user to interact with a “What you know” security measure using a “What you have” method. At some point in the near future I’ll be covering these on the blog as design patterns for influencing behaviour.

It’s also a kind of errorproofing device, a poka-yoke employing specialised affordances. If used, it prevents the user mistyping the code.)

The Instructable is also embedded below (Flash), but for whatever reason there are a few formatting oddities (including hyperlinks being ignored) so it’s easier to read in the original.