Influencing individual people’s behaviour often seems to be about mundane or trivial things, such as choosing one type of magazine subscription over another, or using less shower gel in a hotel bathroom.

But if we’re honest, it’s only in aggregate that behaviour change is going to have any real effect on the world outside the specifics of individual interactions. I think most people involved with design for behaviour change appreciate that it’s going to be mass behaviour change that makes the difference to humanity’s health, environment, happiness and effectiveness in the long run, whether via mass interpersonal persuasion or some other method.

This is where the opportunity for the most ambitious, most audacious plans becomes apparent, and few are more ambitious than Peace Dot, a new initiative from Stanford’s Peace Innovation Team, led by BJ Fogg and bringing together companies and organisations as diverse as the Dalai Lama Foundation, Facebook, CouchSurfing and Sourceforge. 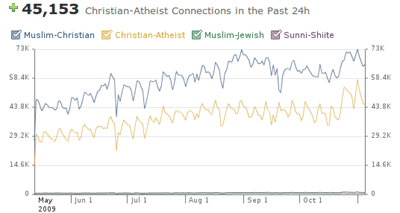 The overall vision behind Stanford’s Peace Innovation work is clear – world peace could be possible in 30 years if we use innovation methods and new technology in the right way. The actual execution is something which will necessarily evolve and change as new technologies afford new possibilities and potential for connection and mass behavioural influence, and the Peace Dot project – while only a small part of this – is a great way to start and demonstrate what’s possible right now.

Initially at least, the focus is on getting a range of companies and organisations to demonstrate (via a special peace.xxxxx.nnn subdomain on their websites) how what they do is bringing people together, from different cultures, different countries, different religions, different political backgrounds etc, and encouraging understanding, cooperation and respect: a specific lens for considering corporate social responsibility in terms of contribution to peace. The ‘Peace Dot’ initiative becomes something like a hashtag for organising and making available current and past data clearly, with a certain degree of social proof to it: making it clear that stereotypes such as “X type of people don’t get on with Y type of people” are not necessarily true.

So Facebook is showing figures, updated daily (e.g. above & right) of new connections between people from different groups (as Dean Eckles points out in a comment on the Guardian’s article about the initiative, the graphs show new connections per day, rather than the cumulative total of connections, so the relative ‘flatline’ of Muslim-Jewish connections is actually showing steady progress); CouchSurfing (below right) is highlighting how it helps initiate cultural exchanges, forming international friendships; while even relatively smaller organisations such as Kara Chanasyk’s White Lotus Design are able to demonstrate how what they do helps bring people together.

As the Peace Dot network develops – with the idea spread via Twitter, Facebook, Google Groups and so on – and more organisations get involved, I’m sure the strategies will develop too, with increasingly innovative persuasive approaches to influencing peace and cooperation. Even encouraging more people to believe that peace is possible, and believing that others believe that too, and that technology is able to help with this, is a significant development. It’s a very worthwhile project to keep an eye on, and it almost inevitably provokes us to consider the extent to which each of us has the potential to be involved, with this kind of initiative or with one of the many thousands of others that might arise: by definition, world peace needs all of us.