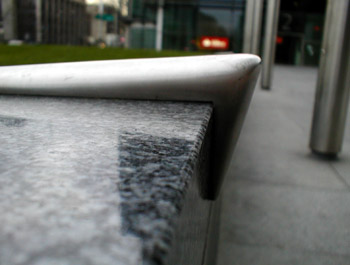 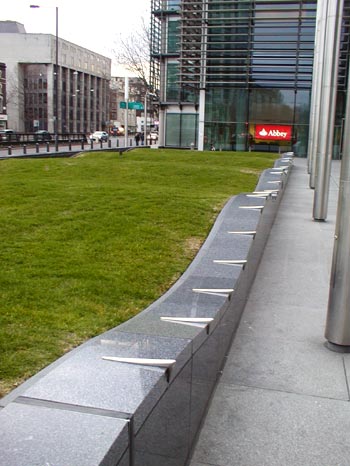 A significant proportion of people who come across this website have searched for “skate deterrent” or “skateboarding control” or something along those lines; I don’t know what the split is between those who are ‘for’, ‘against’ or just ‘interested in’ disciplinary architecture of this kind.

Anyway – here’s an example of ‘pig ears’ outside Abbey National‘s headquarters (just off the Euston Road in London) which have been styled more sympathetically to work with the architecture of the surroundings as well as protecting the marble (-effect?) slabs (and no, I don’t know if the undulating turf is some kind of executive mini-golf course).

Presumably these pig-ears are readily available items from architectural suppliers. Whilst they’re less ‘hostile’ in appearance than many, I don’t quite see why they need to taper to a sharp point other than to give a slightly threatening air. What would happen if a member of the public tripped/slipped and was injured specifically by the pig ear as opposed to the edging itself?

More examples of skateboarding deterrent design from a great paper by Ocean Howell.

(UPDATE – Oct 2006: The two Ocean Howell links above were broken – they now point to mirrors of the original articles – one mine, one Wayback Machine’s)

Below: An ugly example from Cambridge’s Sidgwick Site. 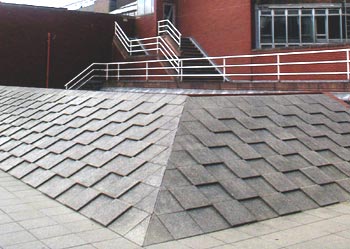