This’ll probably be my last post of 2006, so I’d like to thank everyone who’s read the blog (and commented, or suggested stories) over the year. 2006 has seen this blog, and the awareness of the ‘architectures of control’ concept, grow substantially – it’s pleasing to have so many regular readers and contributors, if a little more daunting. My apologies to everyone who’s been in touch to whom I still haven’t replied or whom I haven’t acknowledged on the blog. I will endeavour to do so soon.

Personally, the year has also been interesting and productive: I’ve gradually established myself as a freelance designer/engineer, worked for some fascinating clients on great projects, won an award, filed a patent application, met (and corresponded with) some fantastic people, and start 2007 with an especially intriguing design project in hand and more on the horizon.

I’ve also learned a lot about working on your own, and the discipline needed to be productive when you have no boss looking over your shoulder all day. A few years ago I told myself that “two projects at once” is the limit of what I can realistically handle (concentrate on one, and when you reach an impasse, you can switch to the other, and vice versa), but I tried to break that rule too often this year, hence the slow progress of projects such as British Petrol Stations and The Unquiet Survivor. (There will be progress in 2007, but no amount of Getting Things Done will actually increase the number of productive hours in the day.)

Going back to the ‘architectures of control’ research, I’ve spoken twice at Speakers’ Corner about the subject (at Copyfighters’ events – see photo below), and have just submitted a detailed book proposal to a major technology publisher. And, to top off a great year of progress with the blog, it has just been accepted into the 9rules network, a vibrant community of blogs on many subjects. As this blog’s coverage and diversity expands, I hope I can live up to readers’ expectations.

Finally I should thank my girlfriend Harriet, flatmate Adam and my family for supporting and helping me progress in 2006. 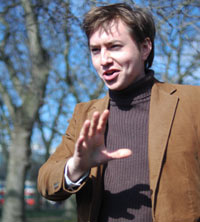