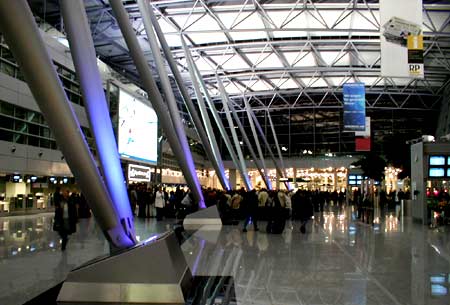 One of the cafÃ©s in an international European airport was often full. The problem was that people sat nursing their coffees for a long time as they waited for their planes to depart. The cafÃ© asked itself: How can we encourage our customers to vacate the tables more quickly?

Their first ideas were probably along the lines of uncomfortable chairs, a seat charge, clear the tables immediately and so forth. However, the idea they finally decided upon was this: to turn off the flight monitors in the cafÃ©! This made people worry about missing their flights, which led to them looking for monitors that worked, thus leaving empty tables. When the cafÃ© had enough empty tables, the flight monitors suddenly started working again to attract new customers.

Creating worry in the customers’ minds would certainly seem to be effective – perhaps more effective than simply deliberately uncomfortable seating, which we’ve come across a number of times before. But is it really a sensible tactic? Won’t those customers, if they use the airport again, consciously avoid “that cafÃ© where we nearly missed out flight last time because they turned the monitors off”? Has it occurred to the cafÃ© operators that, perhaps, their customers value sitting down to ‘nurse’ their coffees as part of the coffee-drinking experience?

HÃ¤rÃ©n doesn’t comment on this ‘contempt for the customer’ issue directly, but he does go on to suggest more positive ways of addressing the ‘problem’:

Formulating a question in different ways can help you look at a problem from different angles. In the case above, for example, you can find new angles by putting the question in another way: How can we sell more? So, instead of finding solutions to the problem of getting people to vacate the tables more quickly, you can also come up with solutions such as set up a take-away stand so that people can have a snack or drink by the departure gates, or sell picnic bags that passengers can take onto the planes with them and so on.

Are there other ‘built environment’ examples of deliberately creating worry to force certain behaviour onto users? What about product design?

Of course, much pharmaceutical (and anti-virus software) marketing and government security/crime propaganda through the ages has taken this line (it’s almost expected), but physical examples seem rarer.