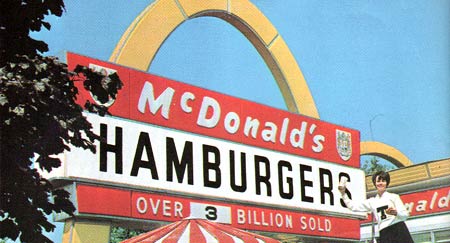 We’ve looked previously at the effect of portion/packaging sizes as a ‘choice of default’ architecture of control, and I’m aware that I have not yet reviewed Dr Brian Wansink‘s excellent Mindless Eating, which examines this and other psychological aspects of the way we eat. I will do this in due course.

In the meantime, though, here’s an interesting account of the invention (probably one instance of many) of super-sizing as a specific technique for increasing consumption, from Michael Pollan‘s fascinating The Omnivore’s Dilemma:

…The soda makers don’t deserve credit for the invention of super-sizing. That distinction belongs to a man named David Wallerstein…[who] in the fifties and sixties …w orked for a chain of movie theaters in Texas, where he labored to expand sales of soda and popcorn – the high mark-up items that theaters depend on for their profitability. As the story is told in John Love’s official history of McDonald’s, Wallerstein tried everything he could think of to goose up sales – two-for-one deals, matinee specials – but found he simply could not induce customers to buy more than one soda and one bag of popcorn. He thought he knew why: Going for seconds makes people feel piggish.

Wallerstein discovered that people would spring for more popcorn and soda – a lot more – as long as it came in a single gigantic serving. Thus was born the two-quart bucket of popcorn, the sixty-four ounce Big Gulp, and, in time, the Big Mac and the jumbo fries, though Ray Kroc himself took some convincing. In 1968, Wallerstein went to work for McDonald’s, but, try as he might, he couldn’t convince Kroc, the company’s founder, of supersizing’s magic powers.

“If people want more fries,” Kroc told him, “they can buy two bags.” Wallerstein patiently explained that McDonald’s customers did want more but were reluctant to buy a second bag. “They don’t want to look like gluttons.”

Kroc remained skeptical, so Wallerstein went looking for proof. He began staking out McDonald’s outlets in and around Chicago, observing how people ate. He saw customers noisily draining their sodas, and digging infinitesimal bits of salt and burnt spud out of their little bags of French fries. After Wallerstein presented his findings, Kroc relented, approved supersized portions, and the dramatic spike in sales confirmed the marketer’s hunch… One might think that people would stop eating and drinking these gargantuan portions as soon as they felt full, but it turns out hunger doesn’t work that way. Researchers have found that people (and animals) presented with large portions will eat up to 30 percent more than they would otherwise.

As I say, we’ll come back to this and similar issues in due course, but I think it’s worth bearing in mind the implications of the unit bias phenomenon within design generally. Where else does it apply?