English Heritage, officially the Historic Buildings and Monuments Commission for England, and funded by the taxpayer and by visitors to some of its properties, does a great deal of very good work in widening public appreciation of, and engagement with, history and the country’s heritage.

But its ViewFinder image gallery website* sadly falls into the trap of trying to restrict public engagement rather than make it easy. Yes, someone specified the old ‘right click disabled‘ policy: 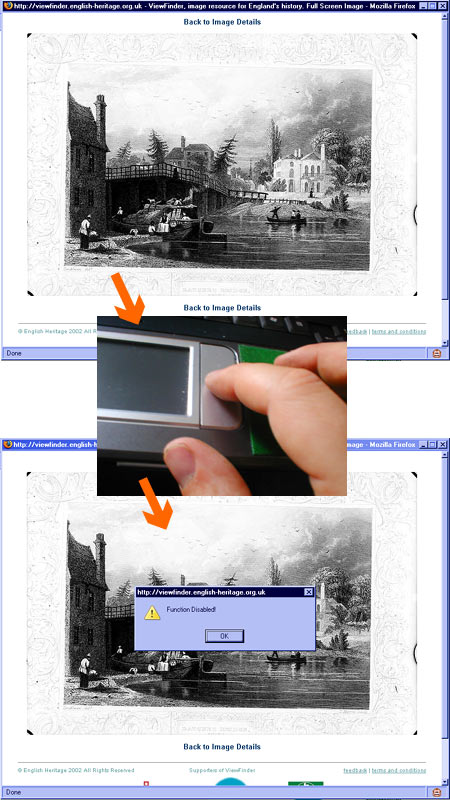 Screenshots of this page, launched from this page.

Now, the image in question – here’s a direct link – which happens to be an engraving of the former Datchet bridge**, in 1840 according to this page (with a colour image) is, even taking English Heritage’s “1860-1922” suggested date range, surely out of copyright, so presumably there cannot be any ‘legal’ question over ‘letting’ people save a copy (which is easiest to do by right-clicking on the most common operating systems and browsers). Using Javascript to remove the browser toolbars and menus also hides the ability to print the image for most users, presumably also deliberately.

Yes, of course, many (most?) readers of this post will know how to get around the no-right-click architecture of control, but you’re reading a technology blog; think of whom the site is presumably aimed at. It is supposed to be a resource to encourage public engagement with history and heritage. Most users will be computer-literate enough to know how to search and probably familiar with right-clicking, but not to mess round with selectively disabling Javascript. Why should they have to? Incidentally, if you do disable Javascript entirely, you can’t even view an enlarged image at all:

What actual use to the public, other than for momentary on-screen interest, is a photo archive website where nothing can be ‘done’ with the images? What is a child doing a local history project supposed to do? Order a print at Â£18.80 for each photo and then scan it in? Does English Heritage really think that the ability for someone to save or print or e-mail a low-resolution 72 dpi image is going to devalue or compete with the organisation in some way?

It’s ridiculous: such a short-sighted, narrow-mindset policy removes a significant proportion of the usefulness of the site. I don’t know whether the site developer did this with or without English Heritage’s instruction or cognizance (and it was in 2002, so perhaps different thinking would apply today), but it seems that no-one bothered to think through what an actual user might want to get from interacting with the site.

In fact, regardless of the fact that this particular image (as with many others on the site) is in the public domain, even the images which are still under copyright (or “Â© English Heritage.NMR” as the site puts it, NMR being the National Monuments Record) should, of course, be freely downloadable, printable, and do-whatever-you-want-able. Their acquisition, preservation and cataloguing were paid for by the public, and they should all be available as widely, and easily, as possible. As it is, I would call the website a waste of public money, since it does not appear to offer what most intended users would expect and need.

Still, at least the site’s not one giant bundle of Flash. That would make it marginally more hassle to extract the images.

*Partially funded by the Big Lottery Fund, and thus not entirely directly taxpayer-funded, unless one regards the National Lottery as an extra tax on the hopeful and desperate, which some commentators would.
**Almost exactly the spot where I’ve been testing a prototype radio-controlled toy for a client this very afternoon, in fact, though the bridge is long gone.