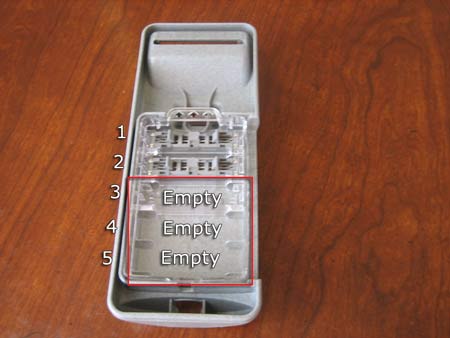 The razor-blade model in general is something of an old chestnut as far as architectures of control go, and we’ve covered it in a number of different contexts on this site over the past couple of years. But it’s always interesting to see it in action with razors themselves, especially if the strategy has become even less consumer-friendly. Via the This Is Broken pool on Flickr, in which ‘Sevenblock‘ talks about Gillette’s use of a dummy blade and dummy slots on the Sensor Excel packaging, I learned of Fred Reichheld’s concept of ‘bad profits’:

…there is something disappointing with the set-up of buying a new razor. This razor reminded me of Fred Reichheld.

The blade which arrives pre-attached to the razor is fake. Is it dangerous to use a real one? Perhaps.

No, it is a set-up to dupe customers into grabbing a new razor and heading to the mirror only to realize that they are holding a plastic faux blade. Then, turn over the packaging, and two razors are held in a spot for five. Another subtle sigh from the customer.

Why not surprise the customer in the other direction? “Wow, five blades! For less than 20 dollars.” Because that’s what happens when you go to refill. BJs and Costco have good deals on bulk blades.

Reichheld’s idea is, effectively, that a company’s strategies can centre on creating ‘good profits’ or ‘bad profits’:

Whenever a customer feels misled, mistreated, ignored, or coerced, then profits from that customer are bad. Bad profits come from unfair or misleading pricing. Bad profits arise when companies save money by delivering a lousy customer experience. Bad profits are about extracting value from customers, not creating value.

What is the question that can tell good profits from bad? Simplicity itself: How likely is it that you would recommend this company to a friend or colleague?

The full article is well worth a read, as, I expect, Reichheld’s book The Ultimate Question is too (though one reviewer on Amazon also offers some succinctly persuasive criticism).

The basic concept, that the ‘ultimate question’ of whether or not a customer would recommend a company is the key to growth is a good way of articulating, from a business perspective, the message of consumer advocacy that so many from Ralph Nader and Vance Packard to Consumerist and Seth Godin have promulgated over the years, though of course the ‘Why?’ and ‘Why not?’ are crucial. But Reichheld’s simple identification of ‘good profit’ and ‘bad profit’ seems to be a very clever way of looking at the issue: the ‘good’ and ‘bad’ labels refer to the effect on the company itself as well as on the customer, since a company reliant on bad profits will, one would assume, ultimately, lose its customer base (unless there are no alternatives – Brand Autopsy has an interesting piece on this in relation to car rental firms).

Most commercially driven architectures of control, then (as opposed to politically driven ones) would seem to be designed to extract value from customers (unwilling or ignorant), and thus might be described as bad profit-seeking, by Reichheld’s definition. To paraphrase Cory Doctorow on DRM, it’s unlikely that any customers wake up and say, “Damn, I wish there was a way to have my actions deliberately constrained for commercial gain by the products and services I use.” Hence, it’s unlikely that customers will evangelise or even recommend products and systems which give them a lousy experience. They may accept them grudgingly, as most of us do with many commercial (and political) interactions every day, but once a ‘good profit’ alternative becomes available and widely known about, they won’t hesitate to switch. I hope.

Maybe ‘good profits’ and ‘bad profits’ are too simplistic as terminologies, much like Jakob Nielsen’s ‘Evil design’ comments, but even a continuum between ‘good’ and ‘bad’ profit intentions is a useful way of thinking about the merits or otherwise of corporate strategies, particularly with customer service, products, pricing, rent-seeking, gouging, lock-in and so on.