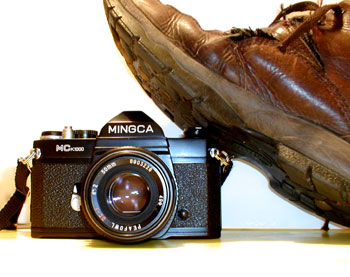 Via Boing Boing, ‘Researchers develop prototype system to thwart unwanted video and still photography’, news from Georgia Tech of a system that scans and finds the CCDs of digital imaging equipment and shines bright light (or a laser) into them in order to flood them with light and prevent usable images being recorded.

“Commercial versions of the technology could be used to stymie unwanted use of video or still cameras. A Georgia Tech camera-neutralizing prototype could soon be used to stop movie piracy and other forms of unwanted digital-camera photography…

The prototype device, produced by a team in the Interactive and Intelligent Computing division of the Georgia Tech College of Computing (COC), uses off-the-shelf equipment — camera-mounted sensors, lighting equipment, a projector and a computer — to scan for, find and neutralize digital cameras. The system works by looking for the reflectivity and shape of the image-producing sensors used in digital cameras…

…the small-area product could prevent espionage photography in government buildings, industrial settings or trade shows. It could also be used in business settings — for instance, to stop amateur photography where shopping-mall-Santa pictures are being taken…

Once a scanning laser and photodetector located a video camera, the system would flash a thin beam of visible white light directly at the CCD. This beam — possibly a laser in a commercial version — would overwhelm the target camera with light, rendering recorded video unusable. Researchers say that energy levels used to neutralize cameras would be low enough to preclude any health risks to the operator.*”

Luckily for those of use who still value our freedom to use technology,

“Current camera-neutralizing technology may never work against single-lens-reflex cameras, which use a folding-mirror viewing system that effectively masks its CCD except when a photo is actually being taken. Moreover, anti-digital techniques don’t work on conventional film cameras because they have no image sensor.”

Regular readers of this blog will be able to guess how I feel about the prospect of the device described in the article, and indeed the moral motivation of the engineers and designers working on it.

This technology is designed expressly to remove the rights of the public by imposing arbitrary control architectures on public space. If something is being publicly displayed, I believe I should be free to photograph it, whether that be with a film camera, a digital camera, or eidetic memory.

Just because someone wants to prevent amateur photographers (read: everyday members of the public) getting a snapshot of their kids with Santa in a shopping mall, in order to sell them an overpriced ‘official’ photo, it doesn’t mean they should be allowed to do so. If it is permissible to operate a device in public which interferes with the operation of lawful imaging equipment, then presumably it will be permissible for a member of the public to shine lasers into the cameras used in the detection system?**

I really cannot mask my distaste for this device, and for the mindset that has created and funded it. It is the thin end of a wedge which has the potential to destroy so many of the freedoms technology has brought us. If I’m wrong, please let me know, but just think for a minute: what might a couple of the consequences be, ultimately, if this kind of technology becomes widespread?

Overall, the distasteful corollary following from widespread use and legitimisation of this kind of device is, simply, the death of amateur photography, as both a recreation and an artform. When arbitrary bodies can extract rent from me for photographing whatever they decide, I’m not going to bother recording the world around me any more, and neither will hundreds of millions of others. The next generation of kids will grow up not knowing the right to photograph what you want, just as the next generation of kids may well believe that music has to be bought over and over again for every device you want to play it on.

It is this embedding of arbitrary controls in the architecture of our society, working outside the law to enforce ‘rights’ with little legal basis, and intentions which are in no way in the public interest, which scares me a great deal.

Norms can be changed by technology without any law needing to change. We need to keep an eye on that, and the eye had better be wearing protective goggles.

*Wouldn’t it be awful if, say, I took a whole load of CCDs with sticky pads on the back into a cinema and scattered them all over the place? I can’t believe the system can dazzle 100 cameras at once. Or if I just happened to be wearing retroreflective sunglasses with similar characteristics to the CCD, and after being “almost blinded” by the device shining into my eyes (not really, of course), was able to make damn sure the device could never be used anywhere again?

**Oooh, what about all those CCTV cameras that film me everyday? Am I allowed to shine a laser into them? What if I live across the street from one? Can I train a laser on it permanently?

EDIT: There are some parallels here with the ‘analogue hole prevention’ mechanisms I looked at in Architectures of control in the digital environment, most notably Hewlett-Packard’s patented ‘paparazzi-proof’ camera-phone image inhibitor system.

EDIT (20.vi): The BBC has now picked up on the story – http://news.bbc.co.uk/1/hi/technology/5097774.stm – no new details but – oh look! – the claim about potential use to stop amateur photographers of shopping-mall-Santas has been left out. The story focuses on the uses to stop ‘pirates’ in cinemas, and not the potential uses ‘in the wild’. Remember, when presenting a potentially distasteful idea as something positive, leave out the bits that relate to everyday life. Make it seem as if you’re only targeting extremes, and then gradually shift the boundaries of what’s ‘extreme’. Martin NiemÃ¶ller taught us that pretty well.