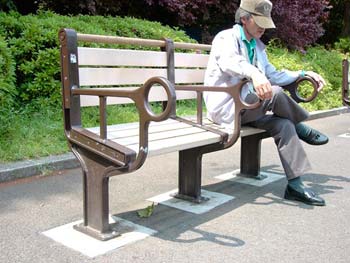 Yumiko Hayakawa has a very thoughtful and well-illustrated article at OhMyNews on the story behind the variety of ‘anti-homeless’ benches and architectural features (including public art) in Tokyo’s parks and public areas – by making it difficult or impossible to lie down. (We’ve looked briefly before at benches with central armrests before, along with anti-sit devices and of course anti-skateboarding measures – ‘disciplinary architecture‘)

Many of the features, such as the benches shown above and below, are also designed to discourage everyone from spending too long on them, even when sitting normally, by deliberately making them uncomfortable:

“The bench in the photo below may appear to be of modern design, but because of its tubular construction one risks sliding off if not careful.

One should be especially careful if drunk at the time! Made of stainless steel, the benches are hot in summer and cold in winter. The Toshima-ward parks office, which oversees Ikebukuro West Park, home to this bench, describes the bench as “designed to keep with the modern image of the area while at the same time not allowing homeless people to loiter.”

Suggestions that the benches were dangerously slippery and also uncomfortable met with the advice that “people should take the utmost care when sitting on them” and that these benches were only something to lean on or sit on for a few minutes.

That is, they want us to regard the bench as “somewhere you can sit if you have to.” It makes you wonder who would actually want to sit on such a bench.” 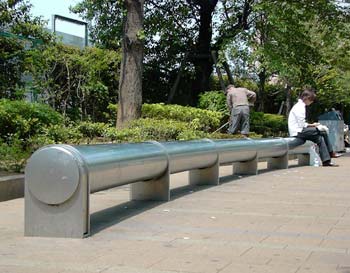 There are examples of bus stop ‘perches’ and uncomfortable cafÃ© seating to discourage loitering from many areas of the world, but it does seem as though Tokyo’s authorities perhaps see inconveniencing all members of the public as merely collateral damage in a ‘war’ against the homeless, which itself is more than simply contentious. Nevertheless, people adapt and find their own ways around discipline. Hayakawa interviewed some homeless people about the benches:

“Most common were the “defeatists,” who gave up on the grounds that the benches were so uncomfortable that it was easier to just lay down a newspaper and sit on the ground. Next most common were the “optimists,” who argued that while they found it a hassle to be unable to sit on benches for a long period of time, it did mean that other park users had to put up with seeing homeless people less. Finally, there were the
“innovators,” who would lie folding their bodies into a V-shape around the central bench divider, or placing bags on either sides of the divider at the same height, or even placing a camping stove underneath the stainless steel tubular bench above to cook and at the same time warm the bench!”

“Do artefacts have politics?” Langdon Winner asked in 1986; the answer is, of course, yes.