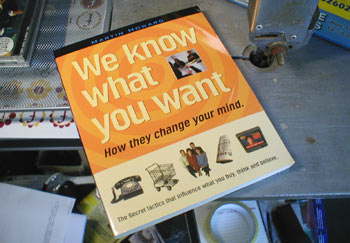 A couple of weeks ago, Martin Howard sent me details of his blog, How They Change Your Mind and book, We Know What You Want: How They Change Your Mind, published last year by Disinformation. You can review the blog for yourselves – it has some fascinating details on product placement, paid news segments, astroturfing and other attempts to manipulate public opinion for political and commercial reasons, including “10 disturbing trends in subliminal persuasion” – but I’ve been reading the book, and there are some interesting ‘architectures of control’ examples:

We’ve seen before some of the tricks used by stores to encourage customers to spend longer in certain aisles and direct them to certain products, but Howard’s book goes into more detail on this, including a couple of telling quotes:

“About 80 percent of consumer choices are made in store and 60 percent of those are impulse purchases.”
Herb Meyers, CEO Gerstman + Meyers, NY

“We want you to get lost.”
Tim Magill, designer, Mall of America

Planograms, the designed layout and positioning of products within stores for optimum sales, are discussed, with the observation that (more expensive) breakfast cereals, toys and sweets are often placed at children’s eye level specifically to make the most of ‘pester power’; aromas designed to induce “appropriate moods” are often used, along with muzak with its tempo deliberately set to encourage or discourage customers’ prolonged browsing. There’s also a mention of stores deliberately rearranging their layouts to force customers to walk around more trying to find their intended purchases, thus being exposed to more product lines:

“Some stores actually switch the layout every six months to intentionally confuse shoppers.”

The book also refers readers to a detailed examination of supermarket tactics produced by the Waterloo Public Interest Research Group in Ontario, The Supermarket Tour [PDF] which I’ll be reading and reporting on in due course. It looks to have an in-depth analysis of psychological and physical design techniques for manipulating customers’ behaviour.

Howard looks at the exploitation of ‘customers’ caught up in mass-crowds or enclosed systems, such as people visiting concerts or sports where they cannot easily leave the stadium or arena or have time, space or quiet to think for themselves, and are thus especially susceptible to subliminal (or not-so-subliminal) advertising and manipulation of their behaviour, even down to being forced into paying through the nose for food or drink thanks to a monopoly (‘stadium pouring rights’):

“One stadium even hindered fans from drinking [free] water by designing their stadium without water fountains. A citizens’ protest pressured the management into having them installed.”

The ‘remote nervous system manipulation’ patents of Hendricus Loos (which I previously mentioned here and here, having first come across them back in 2001) are explained together with a whole range of other patents detailing methods of controlling individuals’ behaviour, from the more sinister, e.g. remotely altering brain waves (PDF link, Robert G Malech, 1976) to the merely irritating (methods for hijacking users’ browsers and remotely changing the function of commands – Brian Shuster, 2002/5) and even a Samsung patent (1995) which involves using a TV’s built-in on-screen display to show adverts for a few seconds when the user tries to switch the TV off.

A number of these patents are worth further investigation, and I will attempt to do so at some point.

We Know What You Want is a quick, concise, informative read with major use of magazine/instructional-style graphics to draw issues out of the text. It was apparently written to act as a more visual companion volume to Douglas Rushkoff’s Coercion, which I haven’t (yet) read, so I can’t comment on how well that relationship works. But it’s an interesting survey of some of the techniques used to persuade and manipulate in retailing, media, online and in social situations. It’s easy to dip into at random, and the wide-ranging diversity of practices and techniques covered (from cults to music marketing, Dale Carnegie to MLM) somehow reminds me of Vance Packard’s The Hidden Persuaders, even if the design and format of this book (with its orange-and-black colour scheme and extensive clipart) is completely different.

I’ll end on a stand-out quote from the book, originally applied to PR but appropriate to the whole field of manipulating behaviour:

“It is now possible to control and regiment the masses according to our will without their knowing it.”
Edward Bernays