This may well be the example which involves the most different ‘architecture of control’ issues so far – by a long way. It is a complex case with a number of aspects, intentions and effects to consider. My mind isn’t made up on the rights and wrongs of this: it’s certainly an architecture of control, it’s certainly devious and it’s certainly a case of introducing a razor-blade model (product lock-in) into a field where there was previously none; it will also end up costing many consumers more money, yet it’s founded in an attempt to ‘encourage’/force more environmentally friendly behaviour.

A couple of weeks ago, George Preston let me know about Eaton MEM BC3 light bulbs and fittings. These are compact fluorescent lamps (CFLs or ‘energy-saving’ bulbs) which have their own kind of three-pronged bayonet connector (left), as opposed to the standard two-pronged bayonet (right): 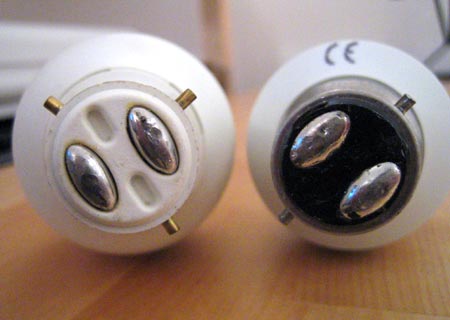 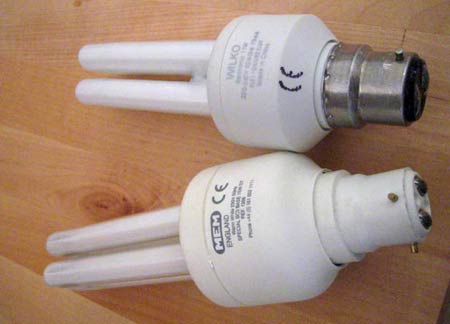 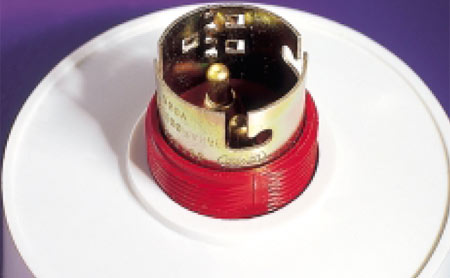 BC3 CFL and standard bayonet CFL compared, and a BC3 fitting. Upper two photos by George Preston; lower photo from BC3 brochure [PDF].

What’s the rationale behind this?

From Approved Document L1 [PDF], an amendment to the UK Building Regulations, which came into force in April 2002 (applying to new-build houses):

1.54 Reasonable provision should be made for dwelling occupiers to obtain the benefits of efficient lighting. A way of showing compliance with the requirement would be to provide at a reasonable number of locations, where lighting can be expected to have most use, fixed lighting (comprising either basic lighting outlets or complete luminaires) that only take lamps having a luminous efficacy greater than 40 lumens per circuit-watt. Circuit-watts means the power consumed in lighting circuits by lamps and their associated control gear and power factor correction equipment. Examples of lamps that achieve this efficacy include fluorescent tubes and compact fluorescent lamps (not GLS tungsten lamps with bayonet cap or Edison screw bases).

The idea is, then, that since ‘normal’ bayonet fittings can take normal tungsten incandescent filament bulbs as well as normal CFLs – something which has of course driven the more widespread adoption of CFLs – there is the likelihood/possibility that householders might replace any pre-installed CFLs with filament bulbs, for whatever reason (the usual reasons are the colour of the light, the aesthetic appearance of the bulbs, and the warm-up time). To prevent this possibility, a new type of light fitting and associated CFL cap design were required which were uniquely compatible, so that anyone with this kind of fitting would have to fit bulbs with the new cap design, which would only be available on CFLs.

(Note that the same objective could have been achieved by fitting these rooms solely with fittings for commonly available standard linear fluorescent tubes, i.e. strip lights.)

So, Eaton’s MEM 250 division created the BC3 (bayonet-cap-3?) range, being nominated for an Electrical Product Award for Contribution Towards Energy Saving in the process.

What’s interesting is that as well as complete BC3 CFLs and BC3 fittings, the BC3 range includes BC3 base units (with the ballast and control electronics in them) into which a four-pin CFL tube can be plugged: 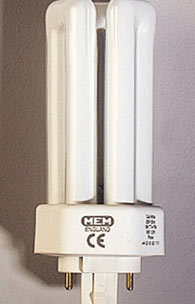 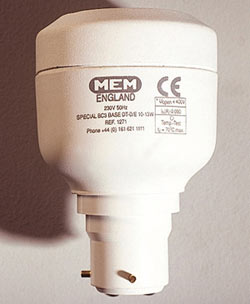 Left: A tube unit with four pin connector; Right: A BC3 base unit (including ballast) to allow the tube to be attached. Images from Ethical Products Direct.

This allows the tube to be replaced independently of the electronics – thus saving resources – but does not appear to be the focus of the BC3 system. (Just a thought: if more new houses were pre-fitted with these base units, or simply standard 2-pin bayonet base units, within the light fittings, so that a householder would simply go out and replace the tube rather than the whole lot, similarly to the linear fluorescent tube suggestion above, would it not have made for a more environmentally friendly solution?)

Some interesting claims are being made for the BC3 system. Somehow the idea of forcing the householder to buy one particular brand of CFL has been transmuted into a misguided suggestion that the BC3 system actually makes the houses more energy efficient – e.g., from a housing association magazine [PDF] in Wiltshire:

Residents in some of Westlea’s newer homes will know that we now fit special three-way bayonet lamp fittings as one way to make the property more energy efficient. Although the ‘BC3 eco bulbs’ needed for these lamp fittings are more expensive than ordinary lightbulbs, using them in a ‘standard’ house could save the resident around Â£100 each year because they use less electricity than ordinary lightbulbs. Some residents have told us they have had difficulty buying the three-pin eco bulbs locally, but we’re pleased to report that the following outlets are able to supply them from Â£6.35 upwards…

From Â£6.35 each is a lot of money. Standard ‘Tesco Value’ 2-pin bayonet CFLs started at 88p each (Tesco, Egham, Surrey) the last time I looked – that’s especially cheap, and they were only 11W, but 15W units are commonly available from about Â£2 – Â£3. Searching Froogle shows that BC3 bulbs start from around Â£10. Even Ethical Products Direct, to whom Eaton MEM’s own website directs visitors wanting to buy BC3 bulbs, charges Â£9.36 for the cheapest complete BC3 unit.

This is a lot of money for something which provides the householder with exactly the same function as a standard CFL a quarter the price. (It’s not as if the BC3 bulbs last much longer, for example, or are more efficient. They just have a non-standard fitting and are only supplied by one manufacturer.) In fact, one might suggest that standard CFLs offer the householder more benefit, since they can be swapped around, fitted all over the place, even fitted to replace incandescent filament bulbs in standard fittings, should someone – shock – actually want to choose a CFL without being forced into doing so.

The housing association quote above demonstrates an important point about the use of BC3s. Many householders’ first encounter with them will be when they notice a CFL going dim or actually failing, or want to increase the light levels in a room, and find that they have to spend much more than they were expecting to spend on a CFL anyway. George’s story demonstrates this well:

We have recently moved into a new flat which is part of a modern development in London. A few lightbulbs needed replacing when we moved in, so I went out and bought some (they’re all energy-efficient ones so I bought the same to replace them with). But oddly, none of them would fit in the fittings. I was under the impression that there were just Bayonet and Screw Cap fittings? These fittings were bayonet, but needed three, irregularly-spaced pins instead of the standard two.

I’m no stranger to energy efficiency, and it wouldn’t be so annoying were it not for the fact that the bulb I had bought as a
replacement was an energy-efficient type anyway, but it seems illogical and a shame that properietary fitting sizes have been introduced into something that has always been so simple – choosing a lightbulb.

(Equally, there is the problem of actually getting hold of BC3 bulbs. I went to the enormous B & Q in Slough on Sunday and couldn’t see any on the shelves. While the 8,000 hour lifetime may mean that there’s not a massive demand for them yet from the public, ordering online and waiting for delivery is not really a great option when a light bulb fails. It often causes inconvenience, and can be dangerous – until Incluminate‘s a production reality (!), the best option is to keep spare bulbs in the cupboard. But if you don’t realise that you need to keep special BC3 bulbs, and that these aren’t available from every corner shop or even every massive DIY store, this is going to be extremely inconvenient. The BC3 brochure does mention a “householder card… which can be left with the homeowner highlighting the ‘energy saving’ aspects of their new home” but how many people will remember to stock up on BC3 bulbs as a result?)

Anyway, I think the main issues are:

The BC3 range is also made in the UK, which aside from actually supporting local jobs, means that the units are not transported from China as, say, Tesco Value CFLs are. That saves on transportation energy, at least, and while – looking briefly – I couldn’t find a patent for the BC3 system, I presume Eaton have it protected somehow, otherwise there would surely be cheaper BC3-compatible bulbs available.

(Another thought is what other proprietary systems – if any – have manufacturers evolved to meet the regulations in part L1? Are there lower-profile rival systems with their own fitting and cap designs? What would the implications be if a particular type were no longer available a few years down the line?)

Overall, this is a clever commercial attempt to respond to a governmental decision made with environmental protection in mind, and as such probably ought to be filed along with optimum lifetime products as something where the intention is to benefit society as well as benefit the manufacturer, at the expense of additionally inconveniencing the user. I feel focusing on a system of built-in base units, with readily available standard replacement tubes (either CFLs or linear fluorescent format) would have been more user-friendly as well as reducing the amount of electronics needlessly thrown away, but it would not have permitted a razor-blade model to the same extent.

It will be interesting to see how the BC3 story develops in the years ahead: will they become commonly available, and how high will public awareness be? There will probably be many more similar products and systems in the next few years using technology to enforce government policy, particularly in an environmental context, and the Eaton MEM BC3 will be an important case study.

*Of course, there’s a lot that ought to be said about the real merits of a large-scale shift to ‘energy saving’ bulbs, particularly in relation to Australia’s decision to phase out incandescent filament bulbs entirely, the European Lamp Companies’ Federation’s focus on the same, Gordon Brown’s announcement on this, and campaigns such as Ban The Bulb.

As a designer and engineer, I would suggest that in cold climates, 100W from an incandescent filament bulb means simply that 100 joules per second of heat is going into my room (probably wasting another 200 joules per second at the power station, but that’s another matter). Light bulbs do heat our homes. If we lose 80W from the light bulb, the heating will probably get turned up by 80W instead. Better insulation, so that that heat isn’t lost, may well turn out to be just as good, or better, than mass-replacement of thousands of millions of light bulbs with CFLs requiring significantly more resources to manufacture (and dispose of). Those electronics in the base don’t come from nowhere, and are likely to outlast the fluorescent tube: hence why the idea of replaceable tubes is much more sensible than throwing away and replacing the base unit each time as well. But the bandwagon’s set off and with heavyweight government and heavyweight manufacturers on board, it’s got a lot of momentum…