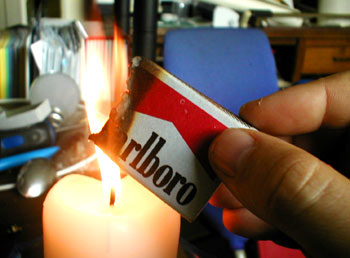 The news that tobacco companies have increased the levels of nicotine in their brands over the last few years – especially those popular with certain groups – made me think further about architectures of control:

“The amount of nicotine in most cigarettes rose an average of almost 10 percent from 1998 to 2004, with brands most popular with young people and minorities registering the biggest increases and highest nicotine content… the higher levels theoretically could make new smokers more easily addicted and make it harder for established smokers to quit.

“The reports are stunning,” said Matthew L. Myers, president of the Campaign for Tobacco-Free Kids. “What’s critical is the consistency of the increase, which leads to the conclusion that it has to have been conscious and deliberate.””

The classification ‘architectures of control‘ ought rightly to include cigarettes alongside any other product designed to be addictive or to reinforce patterns of users’ behaviour. In this sense, any psychoactive drug intended to control/alter users’ behaviour must be considered part of the same phenomenon, certainly when it is created or administered with that specific intention. And of course, these are not just designed to be unpleasant, but designed to injure and endanger life (not until revenue’s been extracted, of course).

It may seem extreme or inappropriate to link, say, the razor-blade business model with drug addiction (just as it perhaps seemed extreme to put biscuit packaging alongside Henry Porter’s ‘Blair Laid Bare’), but there are definite parallels. A product is designed with a feature which intentionally locks customers into that product, through making it difficult to switch (for cost reasons, by ingraining habits, or by actual chemical or mental addiction). In the cases of, say, printer cartridges or razor blades, the original products (the printer or razor) require frequent refills/replacement parts. In the case of cigarette addiction, the initial use of the product (the cigarettes) modifies the behaviour of the host (the smoker) so that continued purchases of the products are required.

In fact, is this not a parasitic lock-in business model? How different is a product which deliberately causes addiction to, say, a piece of malware which takes over a user’s computer and installs unwanted software, or advertising pop-ups, or, say, phones home regularly and has the potential to hold the user’s data to ransom?

From the point of view of educating the wider public (including designers), the cigarette/drug addiction comparison is a good way of immediately highlighting the issue of ‘product rights management‘ as an architecture of control.*

(Washington Post link via A Blog Around the Clock and BoingBoing)

*Wish I’d thought of it at last Sunday’s Copyfighters’ event!