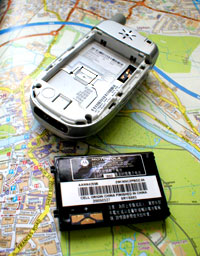 Via MAKE, an article from Electrical Design News looking at lithium battery authentication chips in products such as phones and laptops, designed to prevent users fitting ‘non-genuine’ batteries.

Now, the immediate response of most of us is probably “razor blade model!” or even “stifling democratic innovation!” (as Hal Varian or Eric von Hippel might put it), and indeed that was probably my own instinctive reaction.

It’s not clear, though, that this is a standard architectures-of-control-enforced-razor-blade-model of the kind we’ve seen with printer cartridges. Most phone owners surely don’t ever replace their batteries during the life of the phone, so I can’t believe that selling owners batteries can be a major part of the business plan for a new phone. I’ve never bought new batteries for any phone I’ve owned. A friend did, though by that time his phone was six or seven years old and he had to resort to eBay to find the correct type.

“Battery-pack authentication is necessary because the lithium-ion cells that are the building blocks of all such packs are changing, and, although they still may have the same physical dimension, their input charging voltage and required charging rates are changing and fragmenting across markets. If the cells charge at the wrong voltage or too quickly, they may explode.“

My reaction, as a design engineer, would be: Why not standardise those characteristics, then? Standards don’t “fragment across markets” without someone causing that fragmentation. (It is true, though, that advancing battery technology does make charging patterns much more important to the life of the battery.)

Make the ‘proper’ packs cheaper and easier to find, then. Surely that’s cheaper and easier than developing a 64-bit key code battery authentication system, and keeping “its secret key in an 8Ã—8-ft vault with 3-ft-thick walls, [with] only two people in the company hav[ing] vault keys,” as described in the EDN article?

Also, quit using the term ‘counterfeit’ to mean ‘all non-manufacturer-approved parts’. That’s a slippery slope to Newspeak. If I buy Fujifilm for a Kodak camera, is that film ‘counterfeit’? Of course not. It would be if it were being passed off as Kodak film, but that only seems to be the case with some of the batteries mentioned in the article (the Kyocera and LG ones near the start). If that’s the real problem – counterfeit batteries with the manufacturer’s logo on them – then be honest about it.

The problem of exploding lithium batteries clearly isn’t insignificant – the following images are from a US Army/Naval Surface Warfare Center presentation [PDF] linked in the MAKE post: 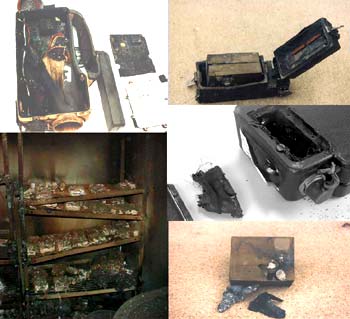 But, as commenter ‘unterhausen’ points out on the MAKE post:

“The risk of Li-poly batteries is independent of the manufacturer to a large degree. The problems come when they are damaged, shorted, overheated, or overcharged… Any Li-poly of the current generation will have the same problems… The chips are anti-competitive nonsense.”

This is an interesting area of debate, and likely only to become more prevalent as energy storage technology becomes more advanced. Will fuel cells for vehicles have authentication ICs built in? You bet.

How will ‘they’ do it with hydrogen fuelling stations, though? Will the pumps/dispensers themselves have a chip which ‘handshakes’ with the vehicle? Will you have to use ‘Toyota’ branded hydrogen for your Toyota to start?

The opportunity’s there, in a way that it never was for standard batteries, petrol, etc, in the past. Few people were naïve enough to buy solely Duracell batteries for their Duracell-branded torch (flashlight) because they thought it ‘would work better’, but when it comes to a device which only works when the manufacturer’s own branded batteries are used

It does make me wonder, though, why Henry Ford never got into the gas station business – was it just antitrust legislation that would have prevented it? General Motors and Standard Oil apparently colluded, and GM also co-owned the Ethyl Gasoline Corporation that held patents for the tetra-ethyl lead added to fuels from the 1920s onwards – which surely provided a large degree of economic lock-in (more GM cars sold = more TEL sold = even more money for GM) – but there was no technological lock-in.

Today we have technology that does allow technological lock-in, and it’s becoming cheaper and cheaper to deploy.