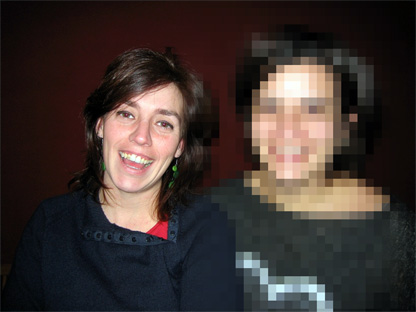 We’ve looked before at a number of technologies and products aimed at ‘preventing’ photography and image recording in some way, from censoring photographs of ‘copyrighted content’ and banknotes, to Georgia Tech’s CCD-flooding system.

Usually these systems are about locking out the public, or removing freedoms in some way (a lot of organisations seem to fear photography), but a few ‘fightback’ devices have been produced, aiming to empower the individual against others (e.g. Hewlett-Packard’s ‘paparazzi-proof’ camera) or against authority (e.g. the Backflash system intended to render a car number plate unreadable when photographed by a speed camera). The field of sousveillance – lots of interesting articles by RÃ©gine Debatty here – is also a ‘fightback’ in a parallel vein.

Taking the fightback idea further, into the realms of everyware, Miquel Mora’s IDentity Protection System, shown last month at the RCA’s Great Exhibition (many thanks to Katrin Svabo Bech for the tip-off), aims to offer the individual a way to control how his or her image is recorded – again, RÃ©gine from We Make Money Not Art:

With IDPS (IDentity Protection System), interaction designer Miquel Mora is proposing a new way to protect our visual identity from the invasion of ubiquitous surveillance cameras. He had a heap of green stickers that could stick to your jacket. Or anywhere else. The sticker blurred your image on the video screen.

“With the IDPS project I wanted to sparkle [sic.] debate about all the issues related to identity privacy,” explains Miquel. “Make people think about how our society has become a complete surveillance machine. Our identities have already been stored as data in many servers ready to be tracked. And our self image is our last resort. So we really need tools to protect our privacy. We need tools that can allow us to hide or reveal our visual image. We must have the control over it.”

“For example in one scenario a girl is wearing a tooth jewellery with IDPS technology embedded. So when she smiles she reveals it and it triggers the camera to protect her. With IDPS users can always feel comfortable, knowing that with a simple gesture like smiling, they are in control. The IDPS technology could be embedded in all kind of items, from simple badges to clothes or jewellery. For the working prototype I’m using Processing to track the stickers and pixelate the image around when it founds one.”

While the use of stickers or similar tags (why not RFID?) which can be embedded in items such as jewellery is a very neat idea aesthetically, I am not sure what economic/legal incentive would drive CCTV operators or manufacturers to include something such as IDPS in their systems and respect the wishes of users. CCTV operators generally do not want anyone to be able to exclude him or herself from being monitored and recorded, whether that’s by wearing a hoodie or a smart black hat with maroon ribbon. Or indeed a veil of some kind.

Something which actively fought back against unwanted CCTV or other surveillance intrusion, such as reversing the Georgia Tech system in some way (e.g. detecting the CCD of a digital security camera, and sending a laser to blind it temporarily, or perhaps some kind of UV strobe) would perhaps be more likely to ‘succeed’, although I’m not sure how legal it would be. Still, with RCA-quality interaction designers homing in on these kinds of issues, I think we’re going to see some very interesting concepts and solutions in the years ahead…